Sinuses are empty cavities that are placed in the head, face and around the nose. Sinuses are full of mucus and leakage is exited, if these secretions become infected, or increased, there may be risk of sinusitis. Keep in mind that, in allergy, amount of the secretion will be increased and patient feel it in dorsal and anterior part of the nose. 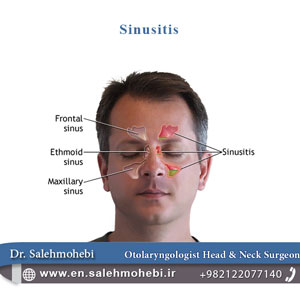 Cold, is one of the most common causes of sinusitis.

Generally, there are 2 types of chronic and acute sinusitis.

After a cold, secretion will be increased and lack of treatment, can results in sinusitis or bacterial sinusitis, which has pain or other symptoms.

Sinusitis is improved after a while by considering some cares. To treat the acute form of the sinusitis, patients should use antibiotics or anti- inflammatory drugs.

Having nasal congestion, nasal leakages and fullness more than 3 months, means that chronic sinusitis. This type of sinusitis, doesn’t have any pain.

In some patients, endoscopic surgery is done. In this surgery, inside the nose will be considered, to examine mucus and leakage of the nose, and then is used for confirmation, diagnosis and treatment.